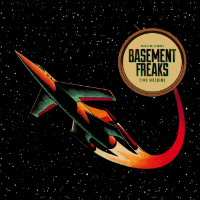 Basement Freaks‘ George Fotiadis is one of the biggest players in the party breaks scene and has been for years. So when there’s a new Basement Freaks LP out and it’s the fourth such musical adventure, it behoves those with a keen interest in party breaks to pay attention. And since his outfit’s new twelve track set has just dropped, you’ll want to know the skinny. Let’s see how they did:

1. WALK AWAY
Actually don’t, since this pleasing Bootsy Collins-ish lope fluffs one nicely for the main action.

3. ALL THAT FUNK!
Ah – here we go – party central – with a reliably JB’s-ish uptempo funk bump.

5. ELECTRIQUE
…as in electro then? All manner of synths. Less a track than the neon-lit spirit of Warp 9.

7. MOVE YOUR BODY feat. MUSTAFA AKBAR
Some dancehall stylings on this but basically you have to wonder how many times this lot listened to Uplift Mofo Party Plan before recording.

8. OUT OF MY WAY feat. GEORGES PERIN
Perin’s back and it’s full-on groovy Prince references here. Until that Courtney Pine-ish sax comes in.

10. THE CALL feat. JOHN TURRELL
Howay man! Big John’s been called in to ensure more successful late night lady action. The album’s potential top 40 botherer if the Radio 1 playlisters ever get to hear it.

11. PARTY TILL THE DAYLIGHT
Subdued piano tinkling, throbbing sub bass and more Pine-ish sax – precisely nails that dirty feeling of having been up for twenty-four hours, drinking right through when you should have been sleeping and somehow failing to score with that girl…

12. ALRIGHT
…as does this. Well – she’s gone now and you’re last man standing…oh look! There’s an unfinished bottle of vodka…

It’s Time Machine by name then and it certainly takes you back by nature – mainly to the 70s and 80s it has to be said and certainly to the pre-ghetto funk era – though of course, as with Mark Ronson, the hallmarks of 21st century production are there to prevent a slavish sense of the retro. In summary, another fine set from Basement Freaks but maturer, one feels.
(Out now on Jalapeno Records)

Posted on 27th February 2016 no comments