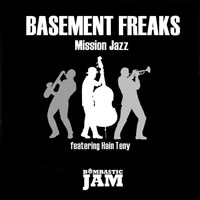 Liking a challenge, Basement Freaks here takes on Misson Jazz which I view as being like mission impossible but even harder. Basically the idea is to do something jazzy that anyone might actually want to listen to and even (less likely) actually want to dance too. Man, that is hard! Those who succeed are few and far between so what better to do than rope in a man who makes it all look easy – Renegades Of Jazz, who turns up on the first remixes here. Second remix features Serbian beat collective Hain Teny who don’t do so badly either. Not sure about the wailing neo-soul-jazz vocals from the original which turn up in one form or another on every mix but then if it was all that easy it wouldn’t be ‘mission jazz’ now would it?(Out now on Bombastic Jam)

(PRESS RELEASE)
We’ve put together two new remixes of the classic “Mission Jazz” single, a jazzy hip-hop version featuring the Hain Teny Collective and an atmospheric drum & bass remix from mSdoS. And, just in case you missed them, we’ve included the original Basement Freaks mix and the Renegades of Jazz mix, featured previously on the “Beat Dilla” EP. But that’s not all. Just cause we’re on the jazz tip, we’re tossing in two hidden gems from the Basement Freaks vaults – the super sexy Basement Blues and a smokey number we’re calling Zuperfly. New jazz for the new age.

Posted on 14th November 2011 no comments