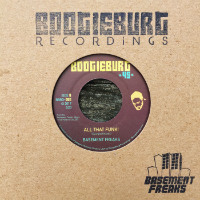 Anyone with their ear to the funky ground in late 2015 and early 2016 will know that one of the highlights of Basement Freaks’ fourth album Time Machine was JBs-inspired uptempo party instro cut All That Funk!, the arrival of which has prompted a clamouring for a seven inch ever since. One can only speculate about reaction to the news, then, that Jalapeno Records have done the decent thing and licensed the track to Boogieburg (where else?) Recordings with a drop-date of – blimey – today! What to put on the reverse though? Well – the label is called Boogieburg – perhaps an exclusive bit of spacey disco-boogie, Calling The Jams? Once people are good and sweaty from the A-side, you can flip this over and get everyone up-close and downright nastaayyy.

N.b. Since this post was first written, Basement Freaks has now made the previously vinyl-only track Calling The Jams a free download which can be copped HERE.
(Out now on Boogieburg Recordings)