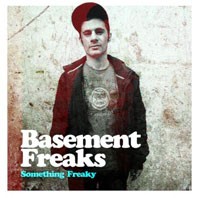 So new a genre that people are still quibbling over what to call it, the bass-heavy combination of hefty, generally uptempo breakbeats coupled with funk, soul, disco and old school hip-hop samples and stylings has nevertheless been around in fledgling form for a few years. Indeed, some might even argue it’s the remnants of the late-nineties phenomenon that many were pleased to call ‘big beat.’ Now, with at least two websites running with the ‘nufunk’ tag and another imminent one going with ‘ghettofunk’ (terms which, in the ever amusing genre-name wars, both used to apply to related but slightly different sub-genres) it seems to be coming of age. Not least of the signs of this rite of passage are the existence of these websites themselves and also the fact that the genre has begun to spawn full-length albums. Alright, Danish producer Badboe had Break The Funk out a year or so ago but most of the genre’s output (from it’s murky genesis in the ashes of big beat until now) has consisted of singles, EPs, remixes, mash-ups and bootlegs. Enter the funky Greek, George Fotiadis a.k.a. Basement Freaks, with Something Freaky which is a collection of all-original cuts. Even if you held to the view it consists of breaks that are funky (and they are funky) and beats that are big (and they are big) it’s not big beat. For one thing, dubstep wasn’t around back then and Basement Freaks is as liable to draw inspiration from that as from seventies funk and disco, or nineties hip-hop. One thing is certain – play this and the party will be rocking – you could drop any cut off this and be guaranteed a floor full of sweaty bodies. No mean feat.
(Out 31 January 2011 on Jalapeno Records)