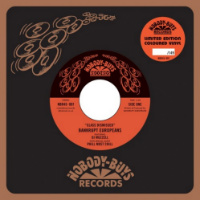 Dayyam! That’s all the monkey is saying about red-hot new 45 Class Dismissed from the long-absent Bankrupt Europeans featuring DJ Muzzell and Phill Most Chill. On second thoughts, ‘Dayyam!’ won’t be enough – not nearly by half – to describe this cut n paste monster made in the tradition of Double Dee and Steinski’s groundbreaking 80s ‘lessons.’ For Bankrupt Euros display precisely the sort of grandmaster-level skills evinced by those original teachers, not to mention subsequent supply staff like Shadow, Cut Chemist and Format. Class Dismissed is quite simply the acme of cutting and pasting funky samples and drum breaks to create b-boy dancefloor havoc. So you can completely understand why Phill Most Chill insisted jumping on the mic over what was originally to be the finished version (which already included contributions from cutmaster DJ Muzzell) but which then had to be revised to include PMC. And if that’s too fast for anyone jonesing for that classic Bankrupt Euros head-nod boom-bap, simply flip this puppy over for a slab the DITC crew would be proud to have dropped featuring cuts from DJ Grazzhoppa and New Jersey’s Twizz and Mr Rich holding forth about their Plans For The Day which, it turns out, can be broadly summarised as, ‘get laid, get paid/ Make some bangin’ ass music and be on my way.” Which in turn conveniently summarises both the work of all involved here and their just rewards.
(Out 23 October on Nobody Buys Records)

Posted on 1st October 2019 no comments