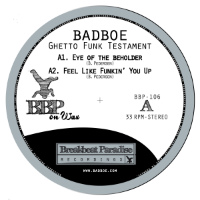 It seems like it’s been ages since a solo original Badboe release – let me see now, that would have been his Pump Up The Funk LP in…2012. But that was three years ago! Good lord! It really has been ages since a solo original Badboe release. Fear not though, this scene legend is back with a vengeance putting the fun back into ghetto funk in a testament that is tantamount to a dancefloor clarion call with…Ghetto Funk Testament. Feel Boe flow on Eye Of The Beholder as he breaks the body of a beat with a vocal snippet from Treach forged into a hook which is juxtaposed with another hook forged from some late seventies/ early eighties soul flavour. Feel Like Funkin You Up, will also make you feel like dancing (not to mention feel the beat y’all) something you’ll be likely to Refuse To Quit when you hear the orchestral ghetto soul of track three and insistent synths-plus-cheeky ‘guest’ vocals from Brooklyn’s one hit rap wonder Uptown on the closer. Dope on plastic! Actually, as the PR is wont to point out, BBP is one of the last labels still dropping this kind of stuff on wax. Not only that but this release will be a vinyl exclusive for six months – so if you want these beats you know you need to get physical.
(Out now on Breakbeat Paradise)