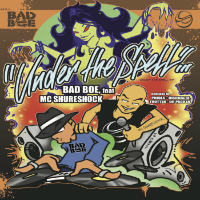 No need to look further if you’re in need of heavyweight funky breaks with original raps on top this month since Badboe‘s got you covered. It’s hard to imagine that Under The Spell will fail to cast its enchantment across dancefloors, turning as it does on a funky sample heavily buried in crunchy drums and synth fx with Oz rapper MC Shureshock busting bars on the mic. As if that isn’t enough, this release comes with four remixes and the instrumental. Phibes are under a wobble spell, Dr Packer‘s under a disco-ish spell, Trotter‘s under a stripped-back breaks spell and, best of all, DiscoBeta are under a Native Tongues boom-bap spell! Magic.
(Out 17 March on Breakbeat Paradise Records)