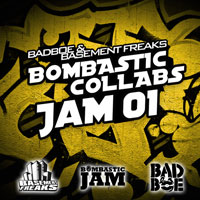 Two of the biggest and most influential names on the party breaks/ ghetto funk scene get together to kick off a new series of hook-ups on the Bombastic Jam label – Bombastic Collabs, as Badboe and Basement Freaks pull a couple of mid-tempo grooves out of their respective bags of beats. And groove really is the word (considering where the ghetto funk sound has been of late) for both tracks focus seem geared to encourage proper dancing rather than jumping up and down and batting the next person on the head with a fucking glowstick. The synth/squelch antics of Suck Up The Thrill with George Perin getting his best Prince on is ever so slightly more in your face than Boomshakala but don’t let that fool you – it’s the second track that rules. Laid-back female vox from Canada’s Lozen, a fuzzy bassline so warm it’ll render you impervious to the worst January can throw at you and a tiny but filthy guitar solo make this a perfect slice of ghetto funk sleaze. Also comes with instrumentals of both tracks.
(Out now on Bombastic Jam)