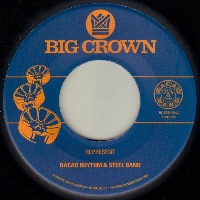 Blimey is it summer already? Of course it’s not! Yet the arrival of a new Bacao Rhythm & Steel Band 7″ always makes it seem that way somehow and new one Represent, featuring the previously unheard Juicy Fruit on the flip, is no exception. Represent you will recognise from last summer’s triumphant third LP, Expansions – a minimal but heavyweight chugger that RZA would’ve lapped up in his Wu-Tang production heyday. Juicy Fruit meanwhile, far from being a tribute to a certain brand of chewing gum’s most teenage flavour, is rather BRSB’s take on the Biggie-sampled Mr Loverman 80s classic from super smoothies Mtume. Did someone say ‘ladies night’?
(Out now on Big Crown Records)