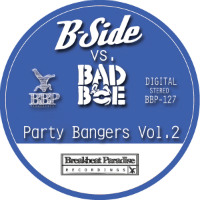 B-Side and Badboe on the same drop? Now there’s a face-off to conjure with as two of the funkiest ghetto funkers go head-to-head for the sequel to B-Side’s Party Bangers Vol. 1 from last year with Party Bangers Vol. 2. Also great timing with the release date – why it’s practically begging to soundtrack Guy Fawkes Night parties! But what is the nature of the four ‘bangers’ hereon? Well, Do You Wanna Ride With Us is a delicately incendiary piece of ghetto-swing-hop booty, Funk Me Again delivers the scattershot explosiveness of a synth-breaks driven slab of J5 booty and Get Busy provides no fewer than seven minutes of Groove Armada-tinged, neo-disco fireworks. This drop’s show-stopper though is the Ludacris-fuelled, ghetto skank of a giant rocket that is Rewind It Back.
(Out today Juno Download exclusive/ Global release 11 November on BBP)

Posted on 4th November 2016 no comments