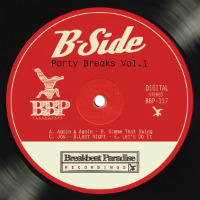 Fireworks Night may be the best part of a month gone but that hasn’t stopped Southampton DJ/Producer B-Side letting loose a five deep set of Party Bangers which is apparently only Vol. 1. And one fully expects (judging by past form) that both B-Side and the label behind this release (that’ll be Breakbeat Paradise) will make good on a follow-up. This drop however opens with synth-bassed appropriation of Here Comes That Sound Again by Love De-Luxe with Alan Hawkshaw’s Discophonia while Gimme That Swing is a grindy-synth based number that occupies the point where ghetto funk meets electro-swing. Like Last Night, closer Let’s Do It strays above 120 bpm for some fairly energetic wobble leaving the disco-tinged ghetto funk of what happens when B-Side takes on 70s Oregon-based disco-funkers for Joy as this release’s big rocket.
(Out now on BBP)

Posted on 26th November 2015 no comments