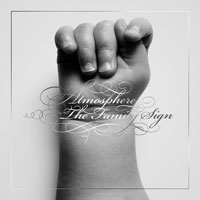 This must be the worst album leak ever – even the shops have got hold of it before the release date! Officially, Minneapolis emo-hip-hoppers Atmosphere drop their latest album The Family Sign next week but it’s already available from numerous UK and US big name web stores and (in several cases) has been for some time. If you’re one of the three people on the planet who haven’t already heard it – what follows is for you – in the best time-saving, track-by-track Byron Crawford stylee. I’m pretty sure he hasn’t written a review since last year so I feel even less bothered about jacking his steez than the last few times I did…Anyway, it’s album fifty nine for Atmosphere – let’s see how they got on:
MY KEY
Doomy blues guitar, lots of tremelo – Slug arrives halfway through with vaguely stream-of-consciousness lyrics and it’s all a bit like an Alice In Chains intro. It’s hip-hop Jim but not as we know it.

THE LAST TO SAY
Slug lightens the mood with a story. About wife-beating. And we channel John Frusciante’s solo guitar work. There’s a kick drum (to emphasise the brutality of someone who thinks the missus occasionally needs ‘a bit of a slap’ to keep her in line?) but that’s about it for percussion.

BECAME
Starts off with a depressing piano and just when you’re thinking of ending it all with a razor blade the break kicks in and Slug tells a story about camping in the snow and wolves and footprints or something. He divines some sort of allegory of his own life from this. Yeah, alright mate.

JUST FOR SHOW
A reggae beat on the verse as Ant co-opts the rhythm of the happiest genre on the planet and then Slug rolls up with some miserablist guff about a passive aggressive partner. Cheers mate.

SHE’S ENOUGH
…and doesn’t she fucking sound like it if she was the bird in the last track? This is the one with the video where the little boy fancies the little girl and shows his love by tipping paint over her. And brother Ali as the school dinner lady. And a quite fit teacher. Liveliest thing so far.

BAD BAD DADDY
It would be amusing if this daddy was ‘bad’ in the Michael Jackson sense but he’s just bad in a beer-drinking, kid-avoiding, waitress ass-pinching kind of way. With a quite annoying guitar interlude.

WHO I’LL NEVER BE
Best beat so far, vaguely Mexican guitar and break – sounds like Ant’s woken up but I think the title alone conveys that we still haven’t turned that frown upside down. Slug has a crack at singing too – and almost gets a Mark Lanegan vibe going melody wise.

I DON’T NEED BRIGHTER DAYS
I have no idea what this is about and there’s lots of big synths and rock guitars to mask the fact that Slug doesn’t either.

AIN’T NOBODY
Bit more western vibe guitar, aided and abetted by a harmonica that sounds like incidental music off The High Chaparral. Sounds upbeat musically and in terms of Slug’s delivery. It isn’t though.

YOUR NAME HERE
Another slowy, doomy pianos and all that – lalala, Slug doesn’t like someone lalala.

IF YOU CAN SAVE ME NOW
Starts off like Atmosphere’s equivalent to I Will Survive and has a similar sentiment about overcoming bad times.

SOMETHING SO
Actually this one’s really upbeat. No it isn’t. Had you going though. I had to stop on this one and go and listen to Raphael Saadiq’s Radio to cheer me up a bit.

MY NOTES
This one really is upbeat. Ish. Thank fuck for that.

COMMENTS:
Christ! Strictly Leakage this isn’t – nor Seven’s Travels and god knows it could do with the beats from either. Mind you, Slug was in full possession of his story-telling mojo on both of those, something he seems to have misplaced on The Family Sign. What else can you say. Oh yeah – cheer up emos!

BEST TRACKS: Who I’ll Never Be, Ain’t Nobody, My Notes
(Out on Rhymesayers now. I mean – next week.)

(PRESS RELEASE)
In the three years since Atmosphere last dropped a full length record on the world, they’ve been far from stagnant, staying at the top of their game in every respect. For the better part of two years, Atmosphere toured the globe in support of their critically acclaimed – and #5 Billboard Top 200 charting – album, ‘When Life Gives You Lemons, You Paint That Shit Gold’, which brought their combined album sales up to the 1.5 million mark. And in their “spare” time, the group returned home to Minneapolis in 2009 to record their 2010 double EP, ‘To All My Friends, Blood Makes The Blade Holy’, an homage to their friends.

In 2011, Atmosphere is taking that feeling one step farther with this long awaited LP, ‘The Family Sign’, a tribute to their true extended family: their fans, their loved ones, and each other.

‘The Family Sign’ was written early in 2010, and as they sat down to record the record, the Family grew a few times over. In the studio, Slug (raps) and Ant (beats) were joined by long time touring musicians Nate “The Guitar Man” Collis (guitar) and Erick Anderson (keys). At home, 2010 also saw the addition of two real-life children to the Atmosphere family, further inspiring the writing process and the concept, and title, of the album.

‘The Family Sign’ comes from a place well refined and firmly planted, from a universal perspective. It’s about being okay with losing friends and strengthening your bonds with others, celebrating the person who’s been the most positive in your life, your kids, your homies, leaving the people you need to behind, and bringing the ones you love with you. It’s about your family, your time and the time you have with them. It’s about living and dying. It’s the truth about family, that it comes from loyalty as much as biology. It’s about breaking down your perceptions of family and really appreciating the people who’ve made you who you are and continue doing so.

‘The Family Sign’ is Atmosphere’s most personal and intimate album yet; it involves and engages the listener like never before. Slug’s signature voice weaves in and out of Ant’s ASR-born production, Nate Collis’ bluesy guitar riffs and the sound of Erick Anderson’s unmistakable keys giving ‘The Family Sign’ a fresh, unique edge without sacrificing Atmosphere’s signature sound. Join the Family on June 20th 2011.

With a winter tour of the UK coming towards the end of this year, it’s the perfect time to jump aboard the train and enjoy the journey that Minnesota’s favourite sons take you on.