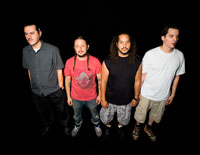 Angstie Boys alert! Minneapolis emo-rappers Atmosphere will shortly be dropping what is something like their tenth studio album. As with the last few albums from the group it pushes the boundaries of the Atmosphere sound and this time they’ve gone all nu-disco. Nah, just kidding – from what I’ve heard of it, production-wise Ant has been using a lot of the mournful blues guitar and minimal piano riffs courtesy of their touring musician homies Nate ‘The Guitar Man’ Collis and Erick Anderson – I’ll leave you to work out who’s responsible for which instrument. Family Sign, in other words, has the kind of sound that characterised To All My Friends, Blood Makes The Blade Holy and Slug is still telling stories like a good’un, though if anything, both lyrics and beats have been darked-up for this.

Officially the release date is June, but if you really can’t wait that long it’s for sale on juno right now (on vinyl no less) and comes with a free razorbla- er mp3 download code too. Cop the video to Just For Show below, which, contrary to everything I said above about blues guitar and pianos, features what is technically a reggae beat – at least on the verses. It’s the only one though – and don’t be expecting some irie island vibe, this one’s all about some relationship or other falling apart and the vid features a labrador being rejected by its owners and forced to wander the depraved streets of what I assume is Minneapolis at night. Bummer. Press guff below vid…
(Out on Rhymesayers June. Ish)

(PRESS RELEASE)
In the three years since Atmosphere last dropped a full length record on the world, they’ve been far from stagnant, staying at the top of their game in every respect. For the better part of two years, Atmosphere toured the globe in support of their critically acclaimed – and #5 Billboard Top 200 charting – album, ‘When Life Gives You Lemons, You Paint That Shit Gold’, which brought their combined album sales up to the 1.5 million mark. And in their “spare” time, the group returned home to Minneapolis in 2009 to record their 2010 double EP, ‘To All My Friends, Blood Makes The Blade Holy’, an homage to their friends.

In 2011, Atmosphere is taking that feeling one step farther with this long awaited LP, ‘The Family Sign’, a tribute to their true extended family: their fans, their loved ones, and each other.

‘The Family Sign’ was written early in 2010, and as they sat down to record the record, the Family grew a few times over. In the studio, Slug (raps) and Ant (beats) were joined by long time touring musicians Nate “The Guitar Man” Collis (guitar) and Erick Anderson (keys). At home, 2010 also saw the addition of two real-life children to the Atmosphere family, further inspiring the writing process and the concept, and title, of the album.

‘The Family Sign’ comes from a place well refined and firmly planted, from a universal perspective. It’s about being okay with losing friends and strengthening your bonds with others, celebrating the person who’s been the most positive in your life, your kids, your homies, leaving the people you need to behind, and bringing the ones you love with you. It’s about your family, your time and the time you have with them. It’s about living and dying. It’s the truth about family, that it comes from loyalty as much as biology. It’s about breaking down your perceptions of family and really appreciating the people who’ve made you who you are and continue doing so.

‘The Family Sign’ is Atmosphere’s most personal and intimate album yet; it involves and engages the listener like never before. Slug’s signature voice weaves in and out of Ant’s ASR-born production, Nate Collis’ bluesy guitar riffs and the sound of Erick Anderson’s unmistakable keys giving ‘The Family Sign’ a fresh, unique edge without sacrificing Atmosphere’s signature sound. Join the Family on June 20th 2011.

With a winter tour of the UK coming towards the end of this year, it’s the perfect time to jump aboard the train and enjoy the journey that Minnesota’s favourite sons take you on.