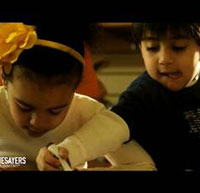 She’s Enough off new LP The Family Sign is Atmosphere’s new track about Slug’s missus. Since it’s Atmosphere though, it’s not ‘she’s enough’ as in ‘Bloody hell mate, one’s enough! Christ – imagine having two wives?!’ but rather ‘she’s enough’ as in ‘she completes me, I’ll do anything she wants.’ This sentiment is conveyed through the medium of video by the juxtaposition of Slug’s lyrics and Ant’s energetic beat with visuals of Slug’s ‘son’s journey through the primary school day as he periodically hassles the girl he blatantly fancies, gets a kiss and winds up with Slug taking the piss and sensitively laughing in his face. Yeah, alright dad. More interesting is the way that despite the story revolving around the two kids, the cameraman frequently lingers quite blatantly on the primary school teacher, who (it has to be said) is quite fit. Oh yeah, and the fact that Brother Ali serves lunch in the school canteen.

(PRESS RELEASE)
Remember when you were a kid and you fancied someone? How instead of telling them they were cute and you wanted to hold their hand, you pulled their hair, pushed them over and called them names? Yeah, well Atmosphere remember that too and in the video for ‘She’s Enough’ they feature a little guy doing just that. But will he get the girl or will she shun him for someone who doesn’t throw pudding on her face? I guess you’re just going to have to watch and find out! Watch out for cameos by rapper Slug, keyboard player Erick and label-mate Brother Ali as the lunch-lady. Sterling work again from Rhymesayers.