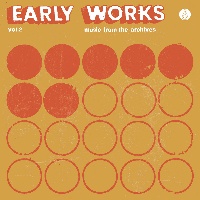 There you are renovating your fourteen year old studio thanks to an unexpected free time dividend courtesy of Covid, sorting through odds and sods as you go and what do you stumble across but some unreleased material from – blimey – ten years ago! And it sounds pretty good. ‘How come we didn’t drop that before?’, seems to have been the question that immediately ran through the forebrain of ATA Records label boss Neil Innes who promptly set to work rectifying matters. Maybe if he paired this old stuff with some more recent unavailable stuff – and some sold-out stuff? Yes, that’ll work! And he could call it…ATA Records: Early Works Vol. 2.! Perfect – let’s get this show on the road. And so it came to pass for here is the resulting compilation featuring all manner of cuts to bring out your inner mod.

For starters, there’s Joe Tatton Trio’s once 45-only and long sold-out Bang Bang Boogaloo which means you’ve got another chance to cop that on wax. Also included is Magnificent Tape Band’s atmospheric psych-soundtrack instrumental Heading Towards Catastrophy – (which is heading anywhere but catastrophe) – and equally moody When I Saw Your Face along with its spiritual cousin, Lunartics, a vocal cut by Ivan Von Engleburger’s Asteroid. Then there’s jazzy mod groover, Secret Universe, by Earl Dawkins & The Lewis Express and opener Bus Stop Boogie, a cut that brings to mind Brian Auger, Julie Driscoll & The Trinity – an outfit evoked even more by The Disarrays’ Help Me. Perhaps the monkey’s favourite cuts though are the loping blaxploitation funk of The Mandatory Eight’s The Hardest Day and the uptempo afro-tinged, psych-funk of The Sorcerers’ In Pursuit of Shai Halud. A limited release, the album drops in conventional black wax with a further a hundred copies in a spicier translucent orange vinyl.
(Out 24 June on ATA Records)