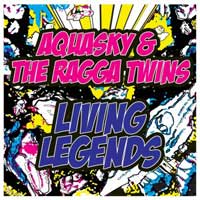 Christ! I got knackered just listening to this. Normally, long-serving breakbeat terrorists Aquasky would be too ‘core to feature on monkeyboxing and – er – they still are. On Living Legends they supply an approximately 135 bpm breakbeat and a loop that sounds suspiciously like it came from the Blues Brothers soundtrack then race ‘do-what-it-says-on-their-tin’ vocalists The Ragga Twins to the finish. If that doesn’t finish you off they also indulge their inner junglist in a drum and bass breakdown in the middle for those who felt like they weren’t really sweating enough on the dancefloor. Very much the spiritual missing link between certain early Prodigy tracks of yore and the more gnarly end of today’s nufunk/ ghettofunk scene. As for Raggatron I lasted about five seconds with that one. Probably best not to look at the artwork if you’ve got a hangover either….
(Out now on Passenger Records)

Posted on 29th November 2010 no comments