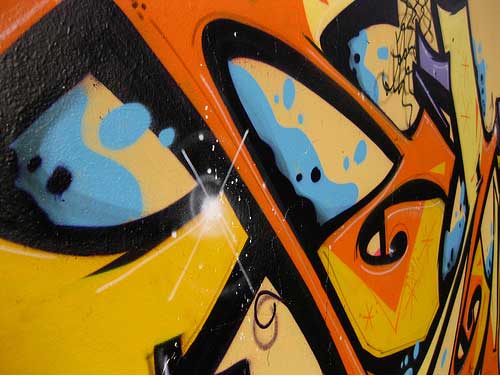 This month you’re getting some fresh French flavour in the form of Audel. This man is straight outta Valence and kicks it live with the DFS and ONE crews. He’s got six years painting time under his belt and is such an integrated European that he cites writers of several nationalities as inspirations for his new school style: Otis from the Fatherland, fellow Frenchman Mire and the UK’s very own Aroe. Audel likes nothing better than getting together with a few mates and enhancing brickwork with spraycans while listening to hip-hop – he says old school’s always cool but likes a bit of Guilty Simpson – or anything else on Stones Throw. If pressed he will modestly admit to having taken part in an exhibition in Strasbourg and doing live graff at Bristol’s Motion Skate Park for the Jump Up Bristol event. He is intent on spreading pan-European wellbeing by setting up a graffiti workshop in Bath – if anyone’s interested in collaborating with him – hit him up via this address: sebastiendoree@yahoo.com. Oh -and he wanted to give shout-outs to Stil, Super, Senk, Wise, 5 Hop, Gomer, DFS crew, Cheba and Lokey and mad props to DownTown. And who are we to deny him that?