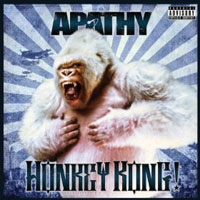 Did you hear about the difference between Donkey Kong and Honkey Kong? The first was a game that showed an ape on a platform while the other is a platform for Apathy to show he’s got game. Yeah alright, not brilliant, but no worse than the title of an album that is the third solo outing for the artist who created it. Well, I say ‘solo’ – he’s brought most of his mates along and, with any luck, it’ll be every bit as good as 2009’s Wanna Snuggle which yielded the excellent B-Real-featuring single Shoot First. And when I say ‘mates’, I’m talking about people like DJ Premier, DJ Muggs and Ill Bill – for example. Dilated People’s Evidence produced first single Check To Check (see vid below) and the DJ Premier-produced Stop What Ya Doin is imminent. Judging by the audio snippets (see player below) that the monkey has heard we seem to be very much in Non-Phixion-y sort of territory. Happy days! Nice cover too. PR and tracklist below vid below player…
(Out 23 August on Demigodz Enterprises)

After signing a major-label deal with Atlantic Records and eventually being granted his release, Apathy released his debut album, Eastern Philosophy in March 2006 and it received rave reviews from Vibe Magazine and a slew of prominent publications and he was highlighted as one of the top upcoming emcees by XXL Magazine with a “Show And Prove” selection and as one of Urb Magazine’s Hot 100” artists. Apathy released his sophomore LP, Wanna Snuggle, in October of 2009 and as with all of his work, it was again met with critical praise; the project included collaborations with Cypress Hill, Mike Shinoda, Skyler Gray and Phonte (of Little Brother).

Though Apathy is a solo-artist at heart, he is an artist who wears many different hats; he is a founding member of the Demigodz crew, he’s also a member of Army of The Pharaohs and the bi-coastal conglomerate The Get Busy Committee (which also includes Scoop Deville and Ryu; they released their debut collaborative effort Uzi Does It 11-10-2009) and joining frequent partner in rhyme Celph Titled to form their Dirty Version Records label. Also, in addition to producing a great deal of his own material, Ap recently contributed production to Cypress Hill’s Rise Up LP and has produced tracks for Mike Shinoda, Skyler Grey, Phonte, Styles Of Beyond, 7l & Esoteric and Get Busy Committee.

On August 23rd, 2011 Apathy will take his career to another level with the release of his third-solo LP Honkey Kong. With Honkey Kong, Ap has undeniably crafted his best project to date and the Evidence produced “Check To Check” has already impacted the blogosphere and only heightened expectations for it. The DJ Premier produced lead-single “Stop What Ya Doin” f/Celph Titled will be released in early August. Honkey Kong includes production from Apathy, DJ Premier, DJ Muggs, Statik Selektah, Evidence, Da Beatminerz and Teddy Roxpin (Mac Miller) among others. Guest appearances on Honkey Kong include Xzibit, Slaine, Vinnie Paz, Esoteric, Ill Bill, Celph Titled, Action Bronson, General Steele (Smif N Wessun) and Mad Lion and the guests that appear on the LP appear for a very specific reason, as Ap verifies; “When I started to make Honkey Kong, I knew I wanted to make a hardcore, classic hip-hop album. I grew up listening to Gang Starr, Wu-Tang, EPMD… and so on. So when this album started coming together, and I started working with dudes who I grew up studying and idolizing, like Preem, Muggs, Beatminerz, Steele, Mad Lion, that made all the bullshit of the industry, worth it to me. Working with DJ Premier, is personally the most important point in my career. That’s my favorite producer of all time, hands down. Everyone who contributed to this album killed it, and definitely brought their “A” game.”