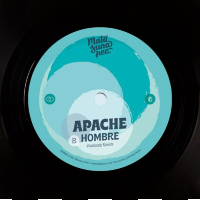 I don’t know if either Liberate or Hombre by Mexican band Apache ever made it onto one of Kool Herc’s famed seventies block-party playlists but listening to this, it’s easy to imagine they might have done. Long unavailable new, after what appears to have been their only appearance on 1976’s four-track Kung-Fu Chino EP, the two cuts in question (for the monkey’s money the best two from said EP) make it onto either side of this release a.k.a. the next Matasuna Records vinyl 7″. Liberate appears in all its original wah-wah drenched glory while Hombre manifests itself in a subtly-augmented Voodoocuts rework. Let me hear you say, ‘Latin funk y’all!’
(Out 12 March on Matasuna Records)