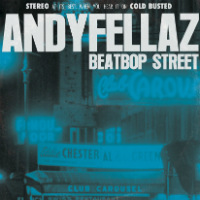 Despite its inception and heyday in the mid-to-late nineties, the downtempo/ cinematic/ trip-hop incarnation of breakbeat music refuses to die and while it may not be flavour of the month anymore, there seems nevertheless to be an inexhaustible supply of it. Perhaps, it’s the ambient nature of the music, the fact that you can put almost any sound behind a decent drum break and get away with it or the fact that producers are freed from such tedious constraints as length of track or traditional song structure. Then again, it might simply be that some of it is just quite good. One such example is this Beatbop Street project from Andyfellaz, a.k.a Athenian producer Beatquick and Wolfy Funk percussionist Nikos Martziokas. The fourteen-tracker adopts a minimal approach to beats and is as likely to feature just drums, bass and trumpet or just drums, bass and piano and leave it at that. Aside from the jazz, the other big influence is a latin one – or perhaps a latin-jazz one – turning up most obviously, as you’d expect, on those tracks with a Brazilian Portuguese or Spanish title. Highlights include the piano-led bounce and haunting trumpet of Just One More Time, the spacey salsa of Madrugada and early DJ Krush-alike cut Two Weirdos. Oh – and the cover’s a bit special too though this evokes jazz-funk era Blue Note more than be-bop that the title and the musical influences on the LP might suggest.
(Out now on Cold Busted)