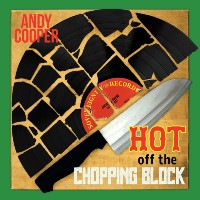 With absolutely no sign of abatement in his blistering release schedule (if anything, things seem to have stepped up a gear!) and barely six months since last full-length effort L.I.S.T.E.N., Long Beach emcee Andy Cooper is back already with news of his forthcoming album, Hot Off The Chopping Block.  The name, like that of 2017’s The Layered Effect, is a reference to the LP’s primary method of production, as Andy explains, his first 3 solo albums were, “all drenched with…sampling and the tracks were primarily made up of full-bar, vintage loops layered together.” This time however, his intention was to, “record funky, high-powered, classic hip-hop with tracks made of diced up (hence the ‘chopping block’) bits of old records,” adding (since a mere solitary challenge is just for lightweights), “and a lot of new instrumentation I played my darn self.”  And the latter is no mean challenge given the many who have attempted to use live music to recreate a sound they used to construct out of samples but end up with something, that commits the ultimate sin of being what Mr C terms ‘funkless’.  Ouch.  No surprises for guessing this album swerves that fate though.

This one is a ten-track affair and if you were in any doubt as to AC’s motivations he lays it down for you on opener Going All Out. For all the fact that it’s just Andy on the mic with good-natured brag bars, the beat will be familiar to fans of classic Ugly Duckling material in terms of sound palette and composition with a loose, funky drum break, fat bassline, stabs of guitar, organs, horns and blasts of train whistle. Next up is Off The Rails which lyrically explores what happens when emcees fall off and hip-hop gets wack swapping the in-your-face party-isms for a simpler but still mid-tempo boom-bap rhythm featuring a swampy harmonica motif and female soul vocal ‘hey!’s. After that we’re briefly into the kind of speed-rap territory that AC has explored over the last few years in collaboration with The Allergies rattling off machine-gun flows over 133 bpm breaks.  Hot Pursuit is a slower, fatter groove, laced with scratches while Mellow Out does just that as a loosely grooving drum break, bassline and female vocal sounds provide a minimal backdrop for some cold chillin’ lyrics. If you were expecting the second half of the album to flag, you will be sorely mistaken.  If anything the final two tracks are the strongest two in the set and if there’s going to be a single release, there’s two sides of a classic 45 right there. Of these, The Connection is the monkey’s favourite track on the LP and the beat rocks a very Tribe Called Quest-ish vibe with a double bass b-line, jazzy sax stylings and crisp drums. In addition, Andy exercises his storytelling chops with engaging noir/ hiphop crossover tale featuring a femme fatale, a dodgy A&R racketeer and shady alleyway settings. Closer Wherever You Wanna Go ends things on a high with nods again to UD’s ouevre – this time to their various Latin-sampling cuts and an uplifting message about the redemptive power of music.   In short, there’s plenty to dig here whether you’ve been with Andy all the way since the early days of Ugly Duckling or more recently discovered him through either his Allergies collaborations or solo work.  Hot Off The Chopping Block is yet more evidence of an accomplished and veteran emcee producer still full of fresh creative ideas several decades into the game. No preview audio players as yet but check all tracks in full via the pre-order link below.
(Pre-order now HERE)