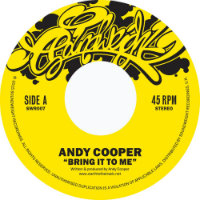 Ugly Duckling’s Andy Cooper is musically on trend as he brings you a limited 45 of two cuts off his recent Free EP. On the A-side it’s Bring It To Me which finds him moving at breakneck speed on a JB-assisted 125 bpm battle rap and channeling the pent-up lyrics of fury denied an outlet by a career in nice-guy outfit UD. Even when he’s being nasty though…he still sounds nice. There’s no faulting the laser-precise delivery however. On the flip it’s nice-guy business as usual with Do The Charlie Brown which, if it sounds rather more UD-ish might be because the beat was made in collaboration with Young Einstein albeit unused on a release – until this year. And it’s all yours for less than a tenner – which is peanuts really. See what I did there?
(Out early October Soundweight Records)