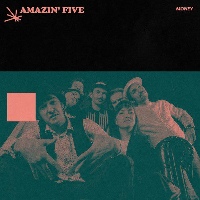 The next digital single from German label Golden Rules in the run-up to the vinyl release of their second volume of all-original funk and soul, The Originals Vol. 2, is from Russian funk outfit Amazin’ Five. Somewhat topically, it’s entitled Money – which I understand is in short supply in Russia at the moment though I’m pretty sure the band didn’t have a controversial invasion of a European nation in mind when they wrote it or the equally controversy-courting sanctions that followed. In fact from the stanky opening guitar and smouldering organ to the clattery drum break and sultry vocals that follow, it’s pretty clear that what they had in mind was a party. Not a political one obviously, that would open a right can of worms, especially in this country the Prime Minister couldn’t tell a political party from one you bring drinks to.
(Out now on Golden Rules)