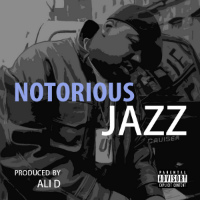 Biggie is hardly the rarest rapper (dead or otherwise) to turn up on cheeky beats (whether single mashups or whole LPs) and yet UK-based sample-fiend producer Ali D has put no fewer than ten of Mr Smalls’ ‘pellas together for the surprisingly fresh Notorious JAZZ. Bet you can’t guess which genre he plundered for his beats. We’re talking what has variously been known as ‘jazz-rap’ or ‘jazzy hip-hop then, though the feel here is not that of the pop-savvy hooks of Dream Warriors, the slickness of Digable Planets or ATCQ’s minimal samples. What this effort does instead is pitch the jazz-hop feel somewhere between the lightness of Guru’s first Jazzmatazz LP and the dreamy piano-scapes of early DJ Krush however – if the latter had raps on them. From Biggie.

Of course, it would be disappointing if such lush production were only available on digital format but in these benighted times of vastly decreased numbers of pressing plants and vastly reduced (despite growing ‘hipster’ purchases) vinyl sales – what’s a man supposed to do? The answer is, ‘his market research and take emails of anyone who wants this on wax.’ This being the case – get in touch with Ali if you are a vinyl die-hard. Standouts include opener the horns-rich Can I get Witcha, the classy piano-led beat of Party & Bullshit , Big Poppa – which, beat-wise, has been imbued with the spirit of Souls Of Mischief’s ’93 Til Infinity about it and the now woozy and rolling Somebody Gotta Die. File alongside Max Tannone’s Mos Dub effort and cop it for free or be generous and name your price.