ALEXIS EVANS: I Made A Deal With Myself + video 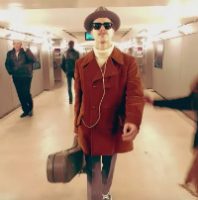 Record Kicks’ new boy is the Anglo-French Alexis Evans and the label’s just released the video of his jaunty album-teasing northern soul-flavoured I Made A Deal With Myself. Deal with yourself eh, Alexis? And the nature of said deal? Oh, it’s to do with the missus – it’s over! Right? But how to represent such a matter in audio-visual format? Maybe you stick your earphones in when she starts moaning, then walking slowly into Bordeaux’s Saint-Jean station. You get your guitar jacked by someone who looks suspiciously like fellow Bordeaux resident Brother Lion of Shaolin Temple Defenders, retrieve said guitar case (which clearly contains a fanny magnet from all the female attention you’re getting) and continue your sedate stroll amid the chaos to an uncrowded platform where a gleaming, futuristic-looking train arrives pretty much as you do. Thus you illustrate how it’s possible to simply enjoy the moment in today’s frantic world whilst providing a timely reminder that a state-owned railway can look like a vast improvement on a highly fragmented privatised one that puts profit above customer satisfaction. Soul and a social conscience. Nice work. Album I’ve Come A Long Way follows on 8 March.