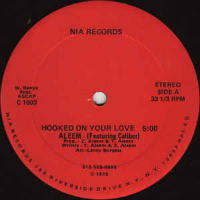 Back in the day, Aleem, a.k.a Leroy Burgess, was responsible for epic vocals on such Black Ivory bangers as You Keep Asking Me Questions. As the decade wore on however, funk was having an increasingly tough time against the mainstream, big money might of disco. Clearly a man to join ’em if he couldn’t beat ’em, Burgess promptly joined disco outfit Aleem and by ’79 was having hits such as Hooked On Your Love featuring a young backing singer named Luther Vandross. Fast forward nearly forty years and what do we have here but an Aleem edit by disco edit don, Don Dayglow, has applied some extra percussive pressure and applied some minor surgery so that those pesky six bar sections on the original now conform to the more helpful eight bars. Cop it below for the price of an occasional Dayglow promo email.