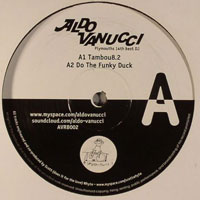 ‘Fatboy Slim’s crate digger’ Aldo Vanucci, known far and wide as Plymouth’s 14th best DJ, is back and this time, Matthew, he’s come as pop slag. Is that Sean Paul I can hear? Crooklyn Clan? A bit of Duck Sauce? KC & The Sunshine Band? Yup, it all goes in the blender with some rather large beats. Vanucci, you have no shame. When playing out, out, it’s probably best to save these until everyone’s really hammered for maximum effect since then they’ll have no shame either and will be too pissed to posture. This is when the combination of big breaks and pop acapellas comes into its own. Got the warm up set? Best play the Dan Le Sac/ Scroobius Pip rinser Thou Shalt Not Skank. Mr Vanucci then, skipping along the knife edge divide between cheese and genius with his customary abandon. Never let it be said that he doesn’t provide for his fans either – enjoy the one that got away from vinyl release because (presumably) Bono still has the global influence of a medium-sized country and the distribution company couldn’t face one of his sermons – Mysterious Sneakers. I won’t expand – the constituent parts of this should be obvious by the end of the fourth bar…enjoy!
FREE DOWNLOAD – Aldo Vanucci – Mysterious Sneakers