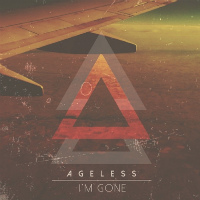 Right, this is long overdue some love and has been languishing in the monkey’s inbox for the best part of a month without there having been sufficient time to give it the ear time it deserves. That time has come however and one thing is certain – if you like your glitch-hop and electro breaks funky and super soulful, you’ve come to the right place as NYC producer Ageless righteously provides ample amounts on third LP I’m Gone.

Opener Escapism briefly pumps like it’s threatening to break into pumping Euro house but then suddenly settles down into a breaks number replete with synth antics and soulful vocal samples that sound a little RJD2-ish. Indeed the eleven tracks that follow provide a sense of the sort of production turning that RJD2 might have missed a few albums back. Ice Breaker (featuring live horns/ synth man Willdabeast) turns on some amping super bass heavy action and Wavy Ride yields a washes of summery keys before heading off into farty synth territory. If that’s not funky enough for you, perhaps the wah-wah ‘n M.A.R.R.S intro to Cold Case will help out. Snippets of Mos Def’s verse from High & Mighty classic B-Boy Document represent the spirit of true school hip-hop on True Friends which also features a few bars of dnb at one point if you’re that way inclined. Best cuts however (aside from the aforementioned Cold Case) have to be the heavy soul-bluesy bump In Trouble and the closer – the excellent Spark Arrester and Bluhax remix of Wavy Ride.
(Out now on Philos Records though you can cop everything below for nothing. Obviously – if you’re feeling generous, you might very well consider making a donation though…)