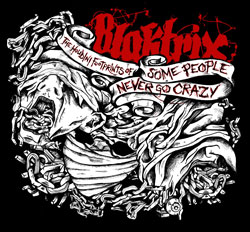 What’s this? A nine-track Blaktrix retrospective digital release FREE to DOWNLOAD – HERE of rare and unreleased cuts? Whagwaan? I’m assuming this is a prelude/ taster of soon come new material rather than a curtain bow. For those who don’t know, Blaktrix is the shit and his rhymes trip off the tongue with understated ease – unlike the name of this EP. I first caught Blaktrix on Sir Beans OBE’s Miles From Home EP and although I haven’t listened to it in a while I can still quote from memory his comment on rushing releases out – “Gas Mark 7, enjoy that turkey/ Tunes these days get released too early.” Certainly not a complaint that can be levelled at some of the stuff on this which has obviously been maturing for a few years. That line appears on Beans’ track Business Is Good which happily also features on this EP. Chek! Press guff below links.
blaktrix.co.uk
Blaktrix – Myspace
(PRESS RELEASE)
THE HOUDINI FOOTPRINTS OF SOME PEOPLE NEVER GO CRAZY’ (SKREEMER RECORDS)
ft. PLO, Mudmowth, Stagga, Rola, Monky, Junior Disprol & Sir Beans OBE…

Like a well kept secret the UK underground Hip Hop scene knows about Blaktrix. Acclaimed for his flow and off kilter techniques he seems eventually destined to be recognised as one of the leading Hip Hop artists in the country…
His first significant release – Indian Rope Trick featuring Humurak d Gritty and DJ Moneyshot – won the Ras Kwames Homegrown for 3 consecutive weeks. The Bradford born artist, who now spends his time between Manchester and Cardiff, went on to feature on the Ras Kwames Homegrown Collection 2006 CD (HipHop Connection Magazine). DJ Magazine described his ‘Trust’ EP ‘a classic’. Blues ‘n’ Soul Magazine acclaimed the next release from Blaktrix ‘What Shall BE’ EP as ‘proof not all best british hiphop comes out of London.’
Blaktrix spent a short stint on the infamous SFDB Label and featured on the Secondson and his Orchestra Lp along with artists such as Taskforce, Lewis Parker and Jehst. He has supported Skinnyman and Goldie Lookin Chain in venues across the country such as Bristol Academy and has performed live on BBC radio. ‘Blix James Bitch’ is played considerably on C4’s Extreme Sports. Blaktrix was also featured on ‘Unsigned’ on HTV Wales. When times were hard Rola from the Numskullz, Monky and Stagga (now renowned dubstep producers) from Optimas Prime provided him with the space and studio to lay down some of his heaviest material. Most of this only ever came out on Vinyl some of it never at all… 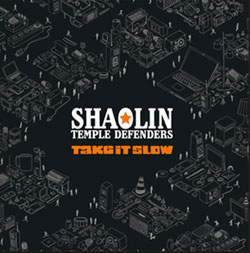 These guys have to run T Bird & The Breaks pretty close in terms of who has the best band name on the contemporary funk scene. But that’s another story. What we have here is the horns-n-Hammond-rich new single and title track of their forthcoming LP (due 4 October 2010) feat. Blackalicious’ heavyweight (in more ways than one) rapper. Actually their myspace indicates the LP will be available on wax this month too…keep your eyes peeled innit! 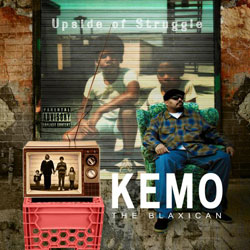