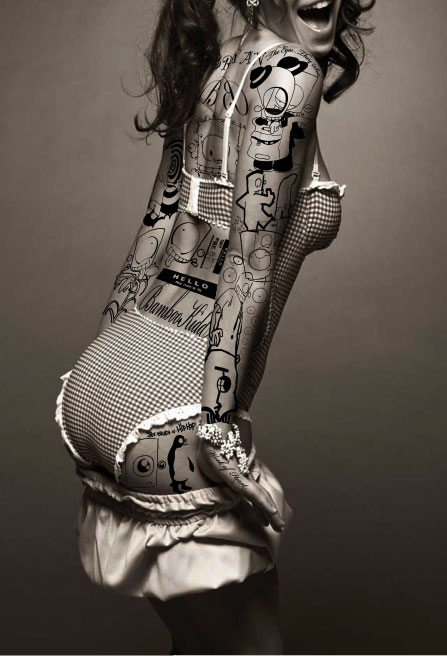 Bamboo produces art under the alias Bambookidd and has been sketching and doodling since he could hold a pen. Influenced by the likes of D*Face, The London Police, Jamie Hewlett, Minilogue, Blu, comics, cartoons and growing up with skater/hip-hop culture, he eventually began to develop and work on a character of his own. The result is is Bamboo’s alter ego – Boo-kidd – a blank canvas who is always colourless and who appears in art that reflects the influences and activity which emerge from his mind. He says that when producing his art he has no preferences in terms of media and enjoys using and experimenting with a vast range saying, “to be honest anything that you can scribe or mark with is fine with me…although Photoshop is the dog’s bollocks.” Past projects have included exhibitions, live drawings, in-store designs for small boutiques and record shops, as well as comic books, flyers and customizations. And (clearly) drawing on semi-naked ladies. For the future, he hopes to get involved with constructing vinyl toys, installations, animation, clothing and sneakers. Good luck to the man!