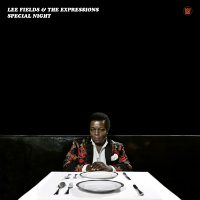 You knew those two recent singles – a lady-friendly, late-night torch song and a storming funk-soul burner – were heading somewhere and here it is – the release of Lee Fields‘ seventeenth (!) studio album entitled Special Night. And if Sharon Jones is queen of the global retro soul scene, Lee Fields certainly has the best claim to be king – not least of the reasons for which is the fact this man was already doing it in Baghdad when most of the global retro global soul scene (fellow veterans like Jones, Charles Bradley and Naomi Shelton excluded) were still in their dads’ bags. Why? Because Fields’ debut release – a 45 featuring (coincidentally) torch song Bewildered and funky heater Tell Her I Love Her came out in 1969. That’s an unbroken forty-seven year funk-soul career!

Of course the word ‘retro’ is appropriate in the sense that the very tried and tested torch song/ dancefloor mix approach from the golden era of funk and soul used by Fields’ on his first single, is – er – the one he is still using. Clearly he’s an ‘if it ain’t broke don’t fix it’ kind of guy and happily it most definitely ain’t broke as Special Night reveals. In fact the balance of tracks on the album is split roughly equally between torch songs (including the title track), slow to mid-paced funky lopes and uptempo bumps. Highlights include the heartache soul of Fields’ would-be Lover Man, JB-ish funk-soul bomb and recent single Make The World, the vaguely Talking Book-era Stevie type stop-starty ballad Let Him In and the most modern-sounding cut – the eminently-sample-able and ‘surely a future single?’ gritty stomp of How I Like It which would sit nicely alongside stuff by Aloe Blacc or Lady Wray. So you can forget ‘harking back’; Fields is ‘still doing’ and not only ‘still doing’ but finding permutations of the soul/funk template that continue to inspire. Now that’s OG.
(Out 4 November on Big Crown Records)

Posted on 3rd November 2016 no comments